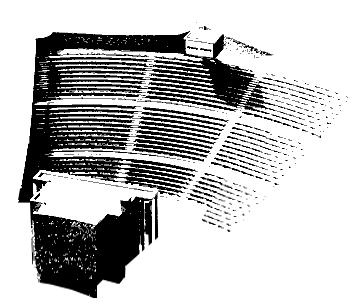 The Lichtenberg open-air theatre was built by The Episcopal College and was opened by Queen Juliana in 1962. During the postwar period of Reconstruction and the Cold War, the (Catholic) establishment tried to contribute to peace by offering young people a podium for international cultural and sporting contacts. The Lichtenberg – together with the school, the Tranchée leisure area, the Stadium, the riding stables and farms – formed a campus where young people were offered a full-time day programme. But in the 1960s the boarding school was closed and the Lichtenberg lost its financial source. This masterpiece, to which the provisor Nabben, the architect Weegels and the artist Martens had all contributed, then lost its function. What had been created in the 1950s fell into disrepair in the 1960s. But the Lichtenberg’s unique ‘visual character’ did not disappear. It illustrates an important period in our national cultural history. The traditional Catholic architecture and the abstract influence of the ‘New Architecture’, visible in the concrete and glass elements, make the Lichtenberg a unique piece of cultural history. The ‘applied art’, the embankments and canals, and the vegetation all combine to make the theatre a cultural monument very much worth saving.

The Lichtenberg is surrounded by narrow canals and embankments. To reach the entrance gate, visitors cross a stone bridge alongside a wall. The ‘corner tower’ next to the bridge originally served to house the pumping installations that provided the swimming pool and tennis courts with water. In the building to the left of the gate, H. Martens designed the mosaics and sgrafitti, which were produced on location with the help of the more talented students. Due to its location adjacent to the open air theatre, the building also houses the public toilets. Nowadays, the building serves the Art Centre Association of Weert and provides space for meetings and exhibitions. The building on the right, beside the entrance to the swimming pool, was originally used by the instructors and is now being used by the petanque club.

The open air theatre was opened in 1961. It was built against a hill with the help of sand dug out for the tennis courts. One third of the theatre lies beneath ground level, which is why it makes a more modest impression when seen from the outside than from the inside. The concrete steps, which fan out from the inside and are fitted with benches, are surrounded by walls made of natural stone, which contrasts with the abstract concrete columns of the theatre building. An audience of 2200 can be accommodated. The theatre itself can be accessed via gates on the side and a lane which leads upwards next to the art centre. Higher up on the hill, visitors are surprised by the sudden (over)view, the enormous dimensions and the difference in height. The back of the theatre building behind the columns is decorated with a sgraffitti work of art by Martens. The lawn in front of the columns, presently overrun by weeds, used to serve as a podium and was often fitted with a stage. Between the steps and the podium, one can find the orchestra pit at a lower level, from where the prompter’s box could be reached. High above the steps rises the director’s box, seemingly defying gravity. It used to be the nerve centre from where the lights in the masts and behind the columns were controlled. The latter are still standing. From the box, it would also be possible to project a film on a large screen against the columns. The theatre looks quite neglected, the wooden benches have long disappeared, and the light masts look very rusty. But the basic construction of steps and walls is still quite solid and can be brought back to life at any moment.

The building originally housed only facilities needed for the theatre itself, such as make-up and changing rooms, toilets and rehearsing rooms. The cellar, which could be accessed directly via an outdoor set of stairs behind the outdoor columns, was used for storage purposes and installations. But the building was soon put to use for other ends as well, for example for bridging classes between primary and secondary school. The outer walls seem to give the building a variety of faces. The monumental west wall, which has almost no openings, has high concrete columns protecting the large sgraffitti artwork, which forms the décor for the open-air theatre. The east wall is made of natural stone blocks, and its concave shape fits in quite well with the surrounding landscape. On the inside, a staircase composed of bricked-in concrete steps seems to climb upwards loosely along the rough stones. In contrast, the north and west walls present an open and abstract appearance. Windows with thin concrete and steel casings allow the sunlight to penetrate into the rooms inside. The floors are inlaid with mosaic work, and the brick walls are decorated with various patterns.

The Maria Chapel was built in 1957 for use by the priest-teachers. The path alongside the canal in the middle was used for reciting one’s breviary. When convenient, Mass was celebrated in the open air. The influence of the famous architect le Corbusier can be seen in the vaulted ceiling, the light openings along the ceiling, and the lantern above the altar. The front consisted of a concrete lattice filled in with tile mosaic and stained-glass windows. The walls on both sides, made of natural stone, close together in a parabolic shape behind the altarpiece. The chapel is presently being used for storage purposes. The concrete altar is still present, but the Madonna and the original wooden door with fittings are no longer there.

In 1954, construction was started on the tennis courts, which are partly dug out. The difference in height was dealt with by building a wall made of natural stone, which kept the balls inside and also kept the wind out. At the front, instead of a wall, there are steps made of slate which function as stands for onlookers. The pavilion and wooden pergola add a special touch to the entire complex. The tennis courts are fitted with drainage pipes. The drains empty into a ditch, which in turn empties into the canal 50 cm lower. It was possible to flood the courts in the winter and convert them into a skating rink. Due to their setting and construction, the tennis courts have an exceptional scenic value.

The swimming pool was built in 1954 and was supplied with water via a pump connected to a pond near the riding stables. The source of the water was the IJzeren Man which drew its water from the Zuid-Willemsvaart canal. The impurities present in this water led to the parents putting pressure on the school to close the pool. The accommodations for the swimming teacher can be found next to the gate. A wall made of natural stone, which serves as the back wall of the changing cabins and ends at the pump house on the canal, forms the border between the grounds and the IJzeren Man Road. The swimming pool, which measured 33 x 25 m and was located in a corner of the grounds, also had starting blocks and two diving towers. The grassy plot next to the pool was originally used for relaxing but is now occupied by tennis courts and the petanque tent. The pool is still present but is now filled with contaminated soil.